The Ho Chi Minh City Stock Exchange (HoSE) announces the end of the deadline for registration of participation in auction of shares of State Capital Investment Corporation (SCIC) at FPT (16:00 on August 6), There are no investors involved. Accordingly, the FPT stock auction was not eligible for organization, so it was considered unsuccessful.

Previously, SCIC announced to auction 46 million FPT shares with the starting price of 49,400 dong / share. This is the auction for the whole lot so investors participating will have to spend at least 2,273 billion dong to buy. At the same time, because FPT has run out of foreign room, SCIC can only sell to domestic investors. 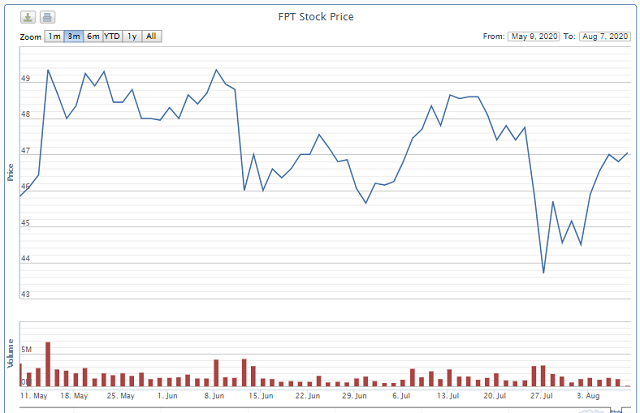 In the first half of the year, two main profitable activities for FPT still recorded growth of over 20%. Specifically, the foreign information technology service provision recorded a 21% increase in profit, reaching VND 896 billion, accounting for 37% of the total profit after tax. Telecommunication services also increased by 22% and contributed 34.3% of total profit after tax.

In contrast, the domestic IT services segment fell 37% in profits and the online advertising segment decreased by 24%. Enterprises said that the Covid-19 epidemic caused a decrease in the demand for investment and spending of domestic enterprises.